Technical Description of the Power Plant 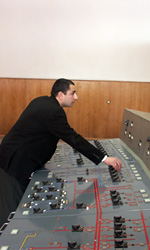 In the non-block part of the power plant there are five gas and oil boilers of the model BKZ-320-140 GM, each with an output capacity of 321 t/h. They feed two co-generation turbines (model PT-50-130/7) each with a capacity of 50 MW and two other T-100-130 turbines, each with a 100 MW capacity. There are six feed pumps and a cooling system of condensers with five evaporative cooling towers.

For cooling the condensers in the four blocks, the air-condensing specifications of the HELLER System are used, which were developed in Hungry. They exclude the possibility of water loss connected with evaporation and give an opportunity to use less natural water. The air-condensing settings of the Heller System have closed water circuit.

Circulating water, which heats up in the condensers, cools off in aluminum heat exchangers, which are located along the perimeter of the cooling tower. The supply of cooling air in towers No. 1, 2, 3 and 4 is done through natural draft/traction of the 120 meter-high towers. The use of chemically desalinated water in the closed circuit of cooling allows for using mixing condensers instead of surface condensers. The first is more economical, since it has a minor temperature pressure of about 0.5 °C and does not require frequent cleansing and renovation.

Before 1993 the major type of fuel for the Hrazdan Thermal Power Plant was oil (mazut) and gas was used as a reserve. However, since 1993 the primary fuel has been natural gas and oil has become a reserve fuel. The supply of gas is carried out through a gas distributing station and gas grid. From the gas grid the gas is distributed to gas control points at the station blocks and non-block sections and further to the boilers.