The Armenian NPP is located in the western part of the Ararat valley: 10 km to north-west of Armavir and 28 km the west of the capital – Yerevan.

Chart 1. Generation of Electricity in the Armenian NPP 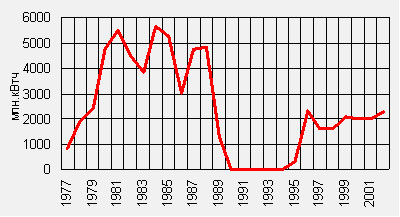 The NPP was commissioned in 1976 (first reactor) and 1980 (second reactor). The nuclear reactors (type: VVER-440, B-230) were upgraded and adapted to local conditions with a seismic rating of 8 and was called VVER 440/270. After the earthquake of December 7, 1988 the Board of Ministers of USSR ordered the operation of the NPP halted.

The Government of Armenia decided to restart the NPP in 1993 to overcome the energy crisis. The rehabilitation was undertaken with international support. Specialists were invited from the US (Bechtel), France (Framatome), Russia (Rosenergoatom) and the IAEA. The second block of the NPP, VVER 440/270 with the installed capacity of 407.5 MW was restarted on November 5, 1995 and had no emergency breakages.

However, the startup of the NPP caused negative reactions both from neighboring countries and international organizations. In 2003, the NPP was given to the Russian “Inter RAO EES” company (subsidiary of RAO “EES Russia”) for management. Today, the plant provides energy of more than one-third of total consumption. In 2003, the NPP generated about 2 billion kWh of electricity which is 36 percent of total generation in Armenia.

Consistent with Mr. A. Martirosyan’s quotation, Chairman of the Armenian Nuclear Energy Inspection, “The specialists of MAGATE made a positive evaluation regarding the level of safety in the NPP as a result of numerous control visits. The recent complex study of the specialists of MAGATE was conducted in November 2003. This study did not reveal any reason to stop the operation of the plant.”

Once per quarter, emergency fire and anti-emergency trainings are performed in the plant. Furthermore, once every three years, emergency trainings are conducted on an international level. Today, the plan is to carry out 3 phases of international level trainings: one at the end of October 2004, the other two will be next year. MAGATE, the European Commission, Great Britain, the organizations of BNFL and Serco-assurance support these training programs.

The US Department of Energy (DoE) has participated in organizing safety advancements at the NPP since the plant’s start-up in 1995. In particular, in 1995 the main agreement between the NPP’s management and the DoE was that the DoE provided USD 1 mln of support for safety purposes. A series of actions were planned for modernization and an increase in the plant’s level of safety. Parties need to be approved by US officials, which is expected before the planned restart of the plant (most of these actions can be performed without stopping the reactor). Simultaneously, the multifunctional simulator is in the licensing stage. Negotiations with the US are being conducted to obtain the full scale simulator, costing $3-4 mln. Use of this simulator will support the skill of NPP personnel and preparation of new professionals.

The essential resources of the NPP’s safety needs were provided by the EU’s TACIS program. Some of these programs are conducted jointly with State Nuclear Inspection of the Republic of Armenia. They are ongoing and will take about 1.5 - 2 years. However, EU support has decreased due to the soon decommissioning of the plant.

At the end of 2003 Mr. G. Markosyan, the General Manager of the NPP stated “Since 1995 to now we have spent about USD 50 mln. on increased safety. At present the plant can work for its technical term of operation, 2016, or more, until 2018. In particular for 1995 - 2003 the US granted about $35 mln. TACIS provided $12 mln. Certain innovative projects are in the works including TACIS’s total sum of EURO 10 mln. These resources will be directed, first, on plant upgrades and installation of a new system of safety”.

At the same time, the issue to start-up the first block of the NPP was also raised. It was stopped in the late 1980’s. However, according to the specialists, it is considered to be practically unrealistic. The remaining capacity of this block is for 10 years only and that is why it is economically ineffective. Until now, there has been no decision by the Government of Armenia on the future of this block. Currently it is decommissioned. As specialists say, it operates on a long-term break which requires substantial investments to keep it safe.

Another scenario of Armenia’s power sector development (worked out by MAGATE) presumed the construction of a new NPP. The program forecasted either building a new NPP or replacing the capacity with alternative energy resources. The cost of each installed kW will cost $1,000-1,200. The program was approved by MAGATE and will be publicized and distributed between MAGATE members in the near future. According to MAGATE, the scenario of a new NPP in Armenia is more attractive from an ecological standpoint. The new TPPs will increase air pollution. If replacing NPP capacity with TPPs, the effluence of CO2 will be 1 mln. tons per year.

The experts say that the problem placed by the EU on the Armenian NPP is idealistic and too politicized. The president of the Russian Scientific Center (RSC) “Institute of Kurchatov”, academic Yevgeniy Velikhov, stated that it is possible to reconstruct the Armenian NPP in a short time and provide the sustainable operation in full capacity without huge investments. As “Gazeta SNG” reported, “During the last years Russian scientists have conducted studies that fully rejected the opinion of some politicians about earthquakes under the power plant, making the future operation of the plant dangerous. According to recent data, the tectonic plates under the NPP is the most steady and stable place in Armenia from a geological point of view.”